Here we have two very good all-mountain helmets from one of the leading helmet manufacturers, Giro. We will consider the details of the Giro Chronicle vs the Giro Montaro to see which helmet suits which rider better.

Since 1985, Giro has been creating some of the most popular and highly ranked helmets of the past decade- including both the Montaro and the Chronicle.

The two helmets are designed for all-mountain riding and are fairly similar in what they offer. In this comparison, we will look at why the Montaro is priced slightly higher and whether it is worth the extra cash for you.

When you are looking for a helmet that suits all day kind of riding, you want something that is light, well ventilated, comfortable, and most importantly, safe. Features we would recommend looking out for include an anti-rotational system (such as MIPS, which both these helmets have), an adjustable visor, comfortable padding, and extended rear coverage.

For more on what to look for in a helmet, see How to choose a MTB Helmet. 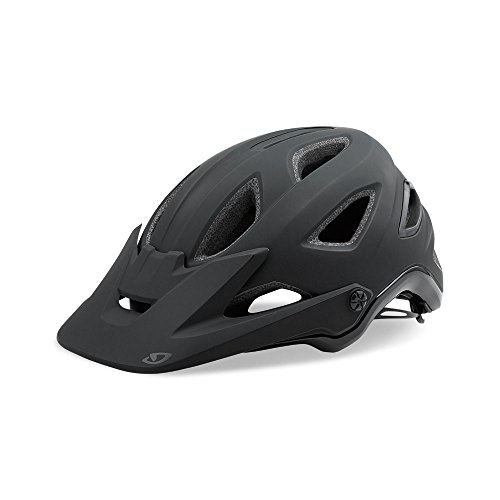 The Montaro was Giro’s top of the line open-face helmet until earlier in 2020 it was replaced by the no-expense-spared Manifest. Even so, it is still in the top 10 best open-face helmets on the market at the moment.

As a top-tier helmet, it has MIPS, an adjustable visor, a great fitting system, is lightweight, and well ventilated. It also has an integrated camera mount and anti-microbial padding to prevent odor build-up. It is a very good helmet, priced lower than many of its competitors.

For the full review on the Giro Montaro, check out this post. 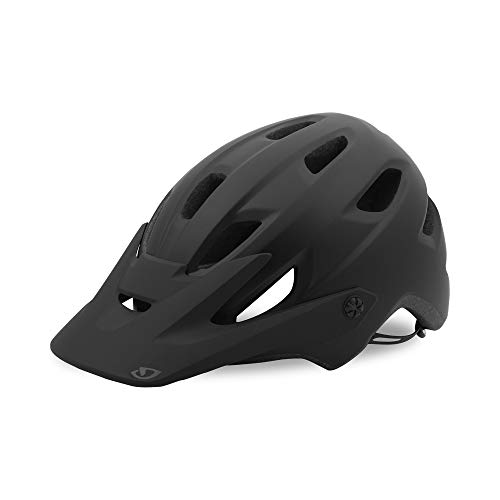 A simpler style helmet, which ticks the boxes on all the features you need and some more, while keeping the cost low and the value high.

The Chronicle was designed as a mid-tier helmet that has all the basic features you need. The design is simple and doesn’t have anything fancy like a camera mount or goggle grippers on the rear of the helmet. However, it does have MIPS, an adjustable visor and very comfortable padding.

The Chronicle stands out in the open-face helmet market for having extended coverage around the rear of the head.

You can tell just by looking at the helmets that the Montaro has had more design put into it. It is more complex and looks a little more streamlined. The Chronicle is bigger and chunkier, with fewer vents.

The Chronicle sits low on your head and covers more of the back of the head to provide more protection. The visor is longer on the Chronicle and only has three place settings, which are quite far apart. This means you get a wide range but can be quite annoying if you would require an in-between setting.

The Montaro also only has three positions for the visor, but the length of the visor is shorter than that of the Chronicle. This means it doesn’t hinder your vision when it is in the lowest setting, though it doesn’t really make much of a difference, and is really up to personal preference on this one.

In terms of safety features, the helmets are reasonably similar. They both have MIPS, EPS foam and the foam is wrapped in a polycarbonate shell.

The Montaro actually has an internal roll cage, which helps the helmet maintain its structural integrity during a crash. It just gives it a little extra strength in case you need it but adds barely any more weight. The helmet still has to be replaced after a crash, though, as the EPS foam doesn’t bounce back into its original state.

The Chronicle has a slight advantage as it has more material protecting the back of the head. If you were to hit the back of your head on a rock following an awkward crash, the Chronicle is better suited to stop that rock damaging the rear of the skull.

Both helmets are noticeably comfortable. The padding is thick and soft to the touch, and the Roc Loc fitting system ensures the helmet tightens around the head symmetrically. In doing so, there are no pressure points on the rider’s head.

The Chronicle has 14 vents and internal channeling, so the ventilation is reasonable. Some riders find it runs a little hot, but for a mid-tier helmet, it isn’t too bad.

Ventilation on the Montaro is superior to that of the Chronicle. The ventilation system is better designed. It has 16 vents, including a number of internal channels to allow air to pass through the helmet. It also has anti-microbial padding, which prevents the build-up of odors, and wicks sweat, so it doesn’t drip into your eyewear while riding.

Unfortunately, the padding on the Montaro doesn’t have a long lifespan. Some riders have mentioned the padding only lasts around 6 months before it needs replacing. While this might only be for the hottest and sweatiest of riders, it isn’t a huge issue, and replacement pads can be easily and cheaply.

The Montaro isn’t exactly as light as you would expect for its price, coming in at 400 g. The Chronicle weighs in at roughly 30 g less. While the majority of riders will never notice this weight difference, you do wonder where this extra weight on the Montaro comes from, given that it has slightly less coverage of the head!

The Montaro, being the top-tier helmet- is kitted out with a few features. It has an integrated breakaway camera mount. So, if you want to catch some cool footage of you shredding, but you’re worried about the safety implications of having a camera on your head, this is a great feature for you! Non-integrated camera mounts are not considered as safe as they generally do not have a breakaway feature if they come under pressure (see more on helmets with camera’s here).

The Montaro has integrated goggle grippers to prevent the goggles from slipping down. The goggle grippers are tiny rubberized pads on the rear of the helmet, which you dont notice until you can feel them.

Both helmets allow you to store your goggles beneath the visor, which is a huge bonus if you don’t like storing them around your neck or handlebars. You can also store your glasses on the helmet comfortably if need be.

Comfort-wise, they are both great. Some riders note that the extended rear coverage of the Chronicle digs into the back of their neck, but I can’t see that happening to too many people.

Both have the same safety features, MIPS, EPS foam and a polycarbonate outer shell. The Chronicle has the advantage of more coverage, but that does interfere with the ventilation a little.

So which one is better?

For the casual cyclist, who doesn’t spend more than a few hours per week out on the bike, the Chronicle will more than suffice. All of the basic features are there, it is a very safe helmet, and you will not be unhappy with the choice!

For the more experienced cyclist, the Montaro will be more comfortable for longer rides as it is lighter and better ventilated. It is certainly the more premium helmet with the features like a camera mount and goggle grippers.

Personally, I would go with the Montaro. It looks good, and it feels less bulky on your head. The fully wrapped shell is definitely a winning feature, as exposed EPS foam tends to deteriorate much faster.

Another helmet we would consider checking out is the new Giro helmet called the Giro Source. This Giro Source is a fantastic, lightweight helmet which is priced somewhere between the Chronicle and the Montaro. Check out the review here.

A simpler style helmet, which ticks the boxes on all the features you need and some more, while keeping the cost low and the value high.